One of the more unsavoury events in our history is the Jameson Raid. Cecil John Rhodes and his friends planned this really ridiculous farce to…. wait, I will let you read about it yourself because I sure don’t understand half of it. I do know that it was one of the triggers that caused the Boer War, and so much misery in this country ever since. Who knows what might have happened had Jameson and his 600 men succeeded in their attempt to “restore order” in Johannesburg, or better yet, never embarked on such a haphazard scheme in the first place. But, given the really bad planning and a really stupid ideal in the first place, the chances of success were really very small.
I deal with what is left over, and there is not too much. Many of the sites associated with the raid are long gone, or built over, graves have become part of the veld, and all that is really left are a few places along Adcock Street out near Dobsonville/Vlakfontein as well as Randfontein, Krugersdorp and possibly Magaliesburg.  There are three main memorials worth considering. Firstly there is the main memorial on Adcock Street. This plinth is situated outside what is loosely known as “the brickworks”, behind which is what is known as the Vlakfontein Memorial. I first photographed it in May 2009, and it was still fenced and the area was badly overgrown. I revisited it on 2 Feb 2012, and the fences have all been stolen, and it is still overgrown! Sadly, all that is left of the so-called Kraal is a low wall and this needle, and there does not seem to be any way of knowing where the original site was in the first place.  On the one side of the brickworks is yet another interesting spot, loosely known as “The Stump“. When photographed in 2009, it too was fenced and not too badly overgrown, sadly the fence has also been stolen and the stump fell victim to fire at some point. From here we move across to Randfontein to what is loosely termed “The Randfontein Estates Gold Mine Military Cemetery” It took the good memory of a security guard to find this spot near the railway lines outside Randfontein, and when I first photographed it in 2009 it had already been badly vandalised. On my visit today I was happy to see that the area had been cleared of vegetation but that does leave it more visible for scrap metal dealers and their ilk. These are the graves of Troopers William Charles Beatty-Powell, John Bernard Bletsoe, Harry Davies, John R.H. Forster, and C.E Hennessy.
In Burgershoop Cemetery in Krugersdorp, there is one more reminder of the Jameson Raid,  that was erected in 1917 to commemorate the casualties suffered by the Transvaal Burghers who opposed Jameson and his raiders. There are also 3 Jameson raiders buried in that cemetery, as well as the five Burghers. 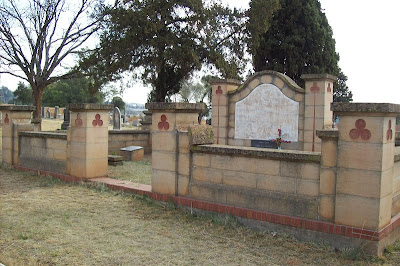 But what is missing?  The Vlakfontein needle mentions 26 casualties. Of these 5 are buried at REGM Military Cemetery and 8 are buried in Burgershoop cemetery. There are some raiders buried supposedly at Vlakfontein farm cemetery, as well as 3 that were supposed to be buried outside Doornkop Military base, there is one listed as being in Magaliesburg but that one has never been found,  and others are listed as burial location not known.
Dr Jameson and his cronies left a legacy that erupted into the Anglo Boer War; by all rights they should have been shot for treason. The punishment meted down to the plotters and leaders was surprisingly lenient. It was the ordinary soldier who once again caught the short end of the stick. Ironically Jameson became Prime Minister of the Cape Colony (1904–08) and was one of the founders of the Union of South Africa.
The physical remnants of the Jameson Raid are now hard to find, a recent visit to a farm in Magaliesburg revealed that the raiders may have travelled through one of the farms en route, 2 swords were ploughed up on the farm, so who knows, just maybe more answers may still be in that area.
© DRW 2012-2018. Images and links recreated 22/03/2016
Post Views: 196
← Previous Post
Next Post →