When I visited Hong Kong in 2008 I was hoping to see at least one cruise ship because it is a very popular destination. The cruise ship terminal is at the Kowloon waterfront, with the ferry terminal right next to it.  I recall that shortly after we had checked into our hotel we headed towards Admiralty on the MTR, but once we got there I branched off and headed for the ferry terminal because I really wanted to ride a ferry and hopefully see a ship or two or three.  And I hit the jackpot

The vessel in front is the Silver Whisper and the one behind the berth is SuperStar Aquarius. During our stay there were 7 cruise ships in port, literally a new one every day, so I made it my business to visit the harbour at least once a day.

I saw Silver Whisper once again in Southampton in 2013.  SuperStar Aquarius is a regular and I saw her every day, she seems to come and go on short junkets all the time. She is not the sort of vessel that stands out amongst the crowd though.  Aquarius is the former Dreamward built for Norwegian Cruise Line back in 1992

Judging by the file numbers the next caller was Hapag Lloyd’s Europa. She is the 4th iteration of ships using this name, and a 5th one entered service in 2013.

It was probably later that day when yet another oldie arrived, and I have to admit my first pics of her were terrible, the pollution levels in Hong Kong can really make for poor photography, especially in the late afternoon.  The Ji Mei is the former Scandinavian ferry M/s Princess Ragnhild of 1966.

I saw her on a number of occasions so did manage better images of her.

The next group of arrivals I only got to see in the evening. Bear in mind that we were attending a course so morning jaunts down to the harbour did not happen; they only happened after we were done for the day.  There is a light show every night at the waterfront,

and when it was finished we headed to the terminal to grab some pics of anything that may still be alongside. On this occasion there were two arrivals. The first being MS Nautica, and she was getting ready to sail. I was fortunate enough to see Nautica once again in Southampton in 2013.

Behind her was berthed Star Pisces and she sailed first, although I could not get a decent pic of her, but managed to see her the next day. She too is a former ferry

Berthed in front of Star Pisces was the Seabourn Spirit. I had seen one of her sisters in Durban in 1992,

and the next day, which was also our last, saw the Crystal Serenity alongside.

However, I had been watching the internet for information about the QE2, I knew she was going to call in Hong Kong on her last world cruise, and I had hoped that she would have been occupying the berth that Crystal Serenity was now occupying when we got to the harbour. Unfortunately that was not the case, she was berthed up in the container area somewhere and a helpful cruise agent more or less pointed me in the right direction. It was literally as close to the end of the MTR line as you could get. My companions were not amused, but eventually we hopped the MTR and headed to the station. There was no sign of the ship, or any ship for that matter, you could not get into the waterfront area to even have a look and I was very disappointed when we returned to our hotel, the situation not being helped by the one co-worker who was becoming more irritating all the time.  When we boarded the bus to go to the airport I watched as we passed the container berth and suddenly I saw her!

A brief 10 second glimpse was all I had of her.  To this day I always regret not investigating that area closer, it was not far from where we had been either, but that was just how things worked out.

When we revisited Hong Kong in 2010 I was hoping to be as lucky again. But much to my disgust there were no callers during the week we were there. The ships would all be calling in the next week instead. The only vessels that we saw were SuperStar Aquarius and Ji Mei

However, it was only when I was processing my images back home that I realised that there were two other cruise ships that I could have seen had I thought about it at the time.

Neptune at the furtherest extent of my lens

A bit of rooting around snagged me a better image of Neptune (By pete (Neptune at Hong Kong) [CC BY 2.0 (http://creativecommons.org/licenses/by/2.0)], via Wikimedia Commons) 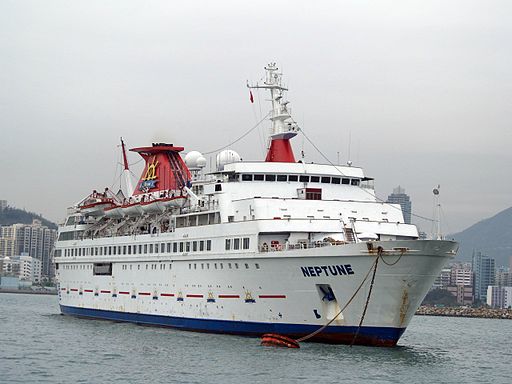 By pete (Neptune at Hong Kong)

And that is how things go,  Hindsight is always so much better.  That concluded my cruise ship viewing in Hong Kong. Hong Kong as a destination is excellent but the air quality can make for poor photography at times. And of course, who knows what is hiding just around the buildings, or in the container berth?

I saw a post on Facebook advising that Neptune (now under the name  Starry Metropolis) had been sold for breaking up. I also asked about Macau Success and was advised that she had been sold in 2014 and subsequently left Hong Kong and was supposedly now in Cambodia and there was no news about her fate.